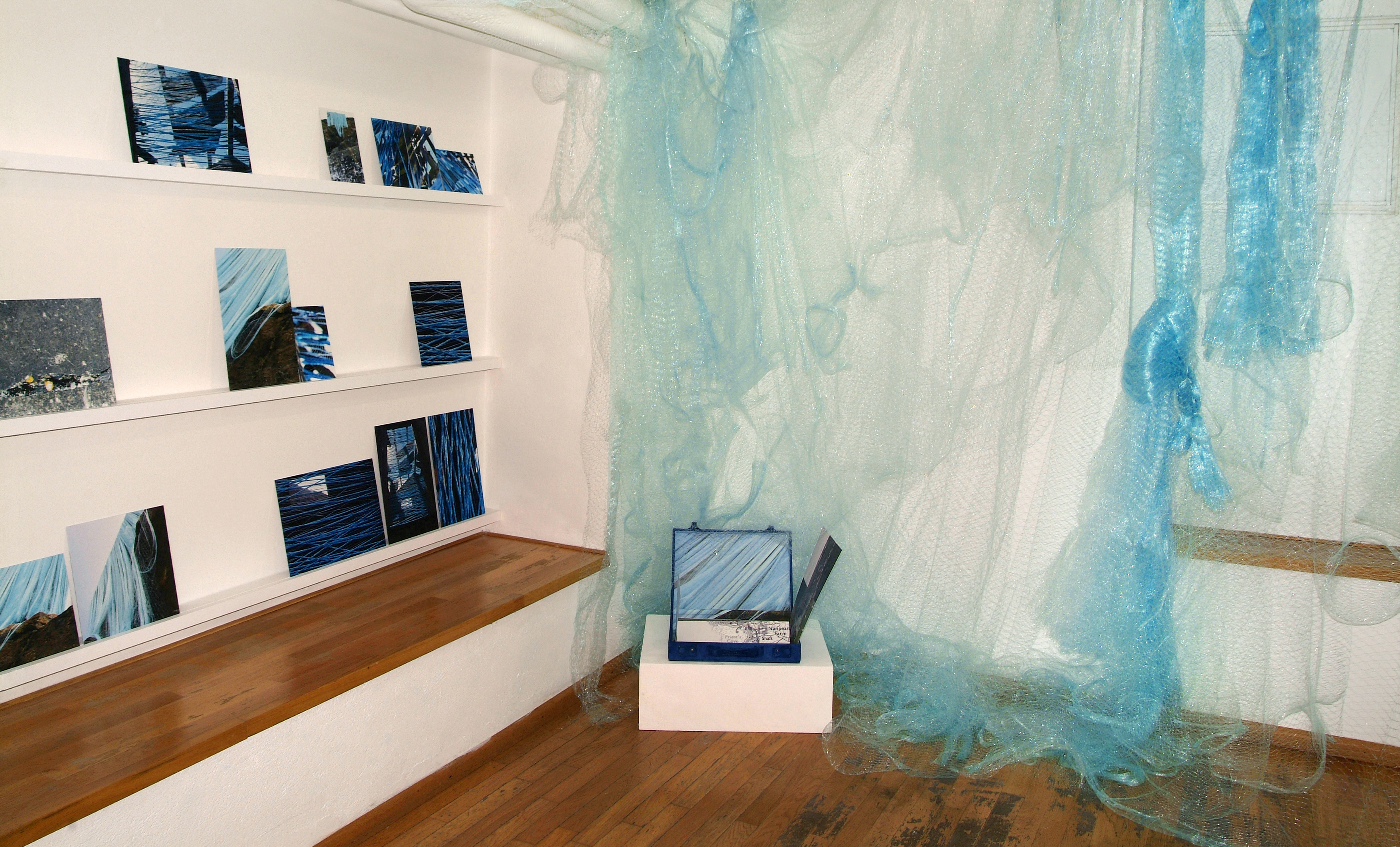 Nuova Galleria Morone presents in its Project Room, CHI, an exhibit by artist Kikki Ghezzi curated by Sara Fontana.
The title Chi stems from the Cornish word for house:“Chi”, a theme quite familiar in Ghezzi’s poetics. In particular, Chi is connected to Cape Cornwall, where Kikki has been artist in residence during the month of August 2015. There, the artist chose to physically take care of an abandoned house, used in the past by miners as a deposit for explosives, wrapping it in blue fish net and fish rope. Kikki worked according to the tide clock and, as a true “mother bird”, she came back each day to repair her fragile nest. The artist has documented her experience in an intimate diary.
The images in the exhibit are presented in different formats and narrate in the quiet space of the project room the respite and dynamics of Kikki Ghezzi’s titanic effort.

Kikki Ghezzi was born in Milan, Italy. Although internationally trained in law she turned her energies full time to art after settling in New York City. There she studied with Larry Poons at the Art Students League and in the ateliers of Graham Nickson and Garth Evans. After earning a painting certificate from Parsons School of Design, the artist enrolled at Pratt Institute in Brooklyn, where in 2007 she received the Speier Foundation Award and in 2011 was awarded a Fine Arts degree (with highest honors). The lessons of Ghezzi’s masters in the academic world were supplemented by her friendships with two artists with deep roots in the art worlds of other generations, Albert Kresch (Hans Hoffmann’s assistant), and Emily Mason, each of whom have provided fresh, constant presences in her daily exploration.In 2016 Ghezzi was resident artist in the LTA program at the Guggenheim Museum, NY. She has been recipient of numerous fellowships including the Vermont Studio Center, the Tyrone Guthrie Centre in Ireland and VCCA in Virginia.
Her work has been exhibited both in the United States and in Europe. Among her most recent shows are: La 24 Ore: Court of Memory at the Institute of Fine Arts of NYU in New York City, Volta la pagina: quattro libri d’artista per quattro artisti del libro at Centro San Fedele in Milan and Frammenti at the Italian Embassy in Washington D.C.