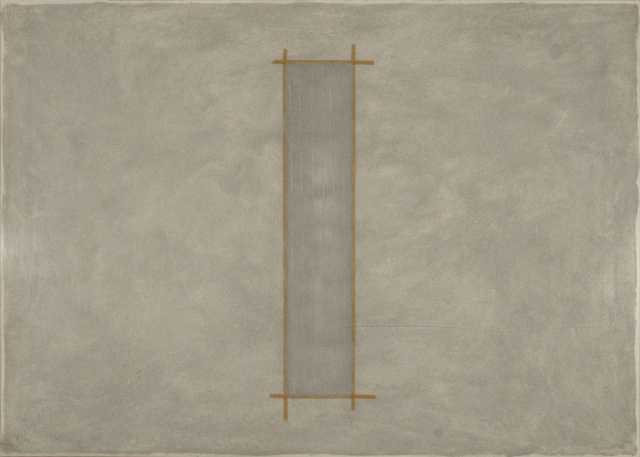 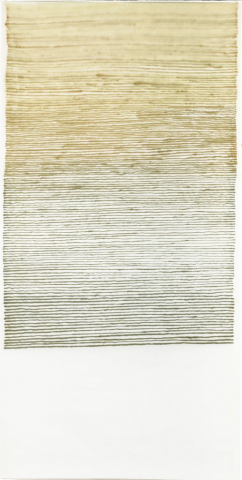 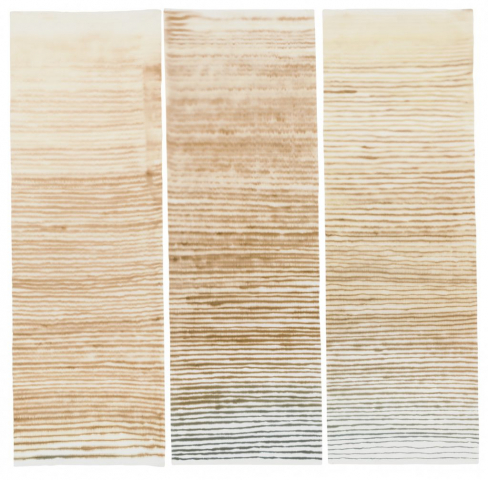 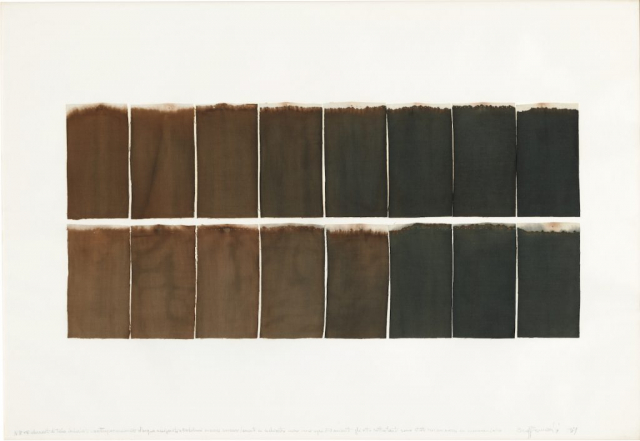 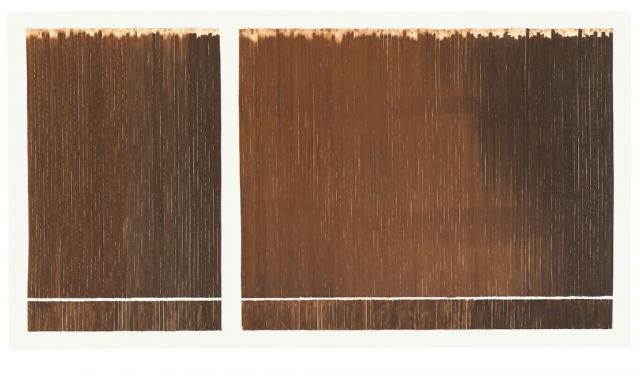 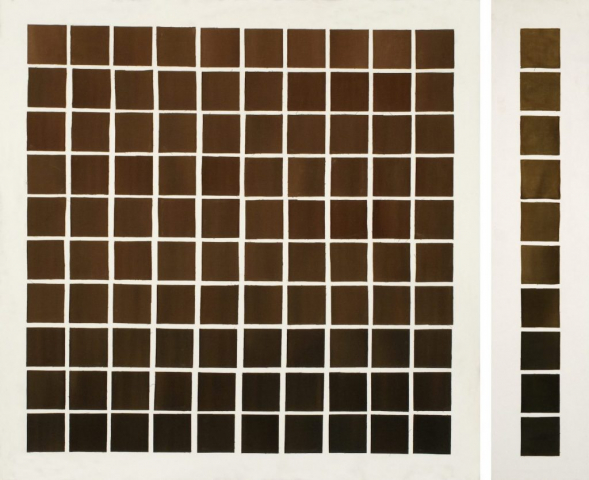 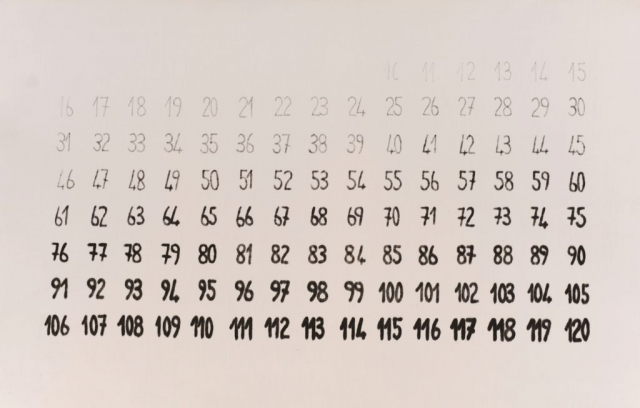 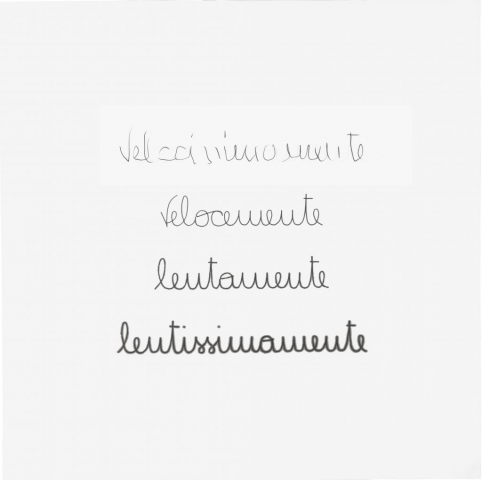 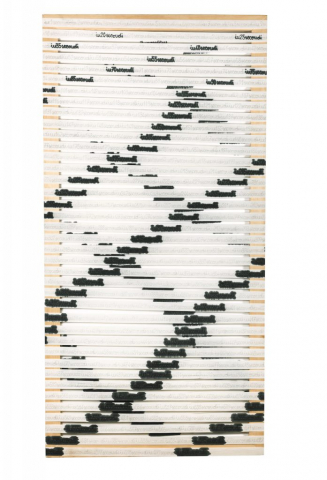 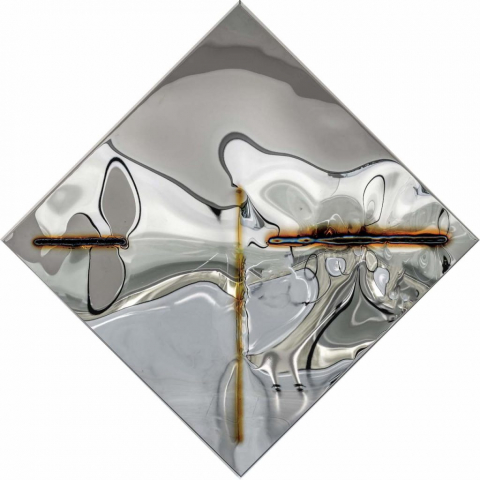 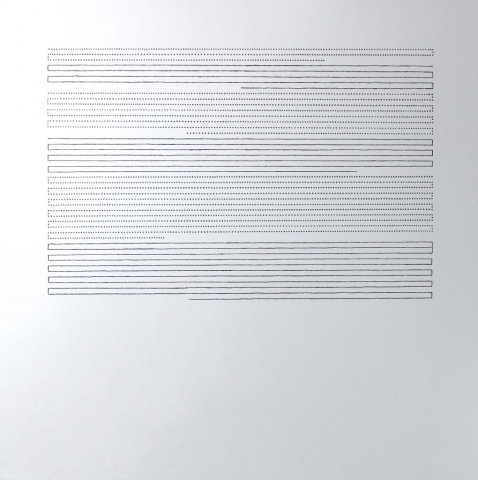 Since his debut in the early Seventies, awareness and consistency manifested themselves in the artistic research of Eros Bonamini, together with a continuous research and in a constant planning tension. Not surprisingly, Giorgio Cortenova, the first who clearly read the artist’s work, underlines “(…) an empirical working procedure, nourished by the basic scepticism that is one of the qualifying aspects of our time (…) the never-ending experimenting the field, characteristic of the workability that has become everyday profession, reject ‘tout-court’ of the shocking and artistic gesture (…)”. In 1975 Bonamini exhibited his Tabelle Pittoriche at the “Galleria dello Scudo” in Verona: inaugural works of his entire creative path, monochrome fields, one on another in succession, able to call into question, until the hypothesis of abandoning them, the representative possibilities of painting. Works such as “maps” and recordings of “actual time of doing”, of the tracks that the artist has confirmed over the years, with tools, materials and interventions of different signs; finally, works as verification of experience, the past, the personal and collective history, calculation of individual time in the evolution of universal time.
In 1975 the Cronotopografie (literally “writings of space and time”) was born. With the series of Cementi, ribbons and inks made between 1975 and 1978, the artist decides to abandon oil colour, favouring poor materials such as cement and glue, chosen to investigate the hardening process by acting on them with incisions of constant form and pressure: the result is the sequence of tracks that tend to disappearance, little by little, while the drying process is completed. Around those years start the Cronotopografie made of cloth strips soaked in peroxide (with decolourising power), immersed in a bath of ink in successive intervals and then exposed, one beside the other, to outline a map of the creative process.
The absorption theme, the interpenetration between ink and surface, which is an active metaphor of space and time values: rejecting the action of painting with increasing firmness, Bonamini chooses the computation of the conceptual action, the verification of its formal transcription and its aesthetic potential.
In the early Eighties, the choice joins the observation and calculation of the canvas ability to imbibe colour, by contact or injection. Initial tools are felt-pens with different tips, which allow verbal narrative iterations connected to workability and time. The second solution is the direct injection of diluted colour on canvas. Hence the series of absorption paintings, overcome, in 1983-84, by another cycle of more structured artworks, with signs, colours, writings and gestures pulled together and overlapping in a sort of stratigraphic repertoire of interventions: Cronotopografie made by a series of sequential primary motives – points, lines, Greek fret, signs, labyrinths, spirals and also scribbles – intended to saturate a field. From concentration to rarefaction of scriptures, between the late Eighties and early Nineties, Bonamini lands to large-scale works, on which he tests a varying action: the crucial moment is the unification of individual canvases, in their arrangement on the wall and also both in the overlapping and in the vicinity.
The important publication and the relative roundtable at “Palazzo Forti”, Verona, in 1993 is about the artist’s research, from then generally defined Cronotopografie. As Caramel, Veca, Miccini and Cortenova, invited speakers, emphasise, despite the diversity of outcomes Bonamini keeps a similar identity of approach in every work, deriving it from the analytical and conceptual line of the Seventies. Tracking and perfecting the analysis of the constants of his work (always directed to connect the empirical level with the theoretical and speculative ones) the critics further clarify the absence of metaphorical, allusive and symbolic references in his work (which, at first sight, could have been noticed in the supporting forms of spiral, graph and its repetition and of line) but recognizing the priority of “(…) the time of making and the making of matter”, as suggested by Eugenio Miccini, and “(…) relativity to another absolute, similarly excluded by human boundaries: the eternal. As Einstein’s universe, Bonamini fields are unlimited but completed (…) At the regressive mistrust of many ‘minimalist’ grammars, Bonamini enacts what it is narrated, entertains eye and mind on the magnificent absences of truth”.
Once the semiotic and chromatic exuberance decants during the Nineties, the artist continues his research on Cronotopografie in different directions: the pictorial one, characterized by a constant trend towards simplification, acted by minimal and light signs, with a palette dominated by white, deep grey and black; another one made with neutral or coloured plexiglass, where the traces of time are translated into precise sequences of point and labyrinthine scars, or burnt wounds and edges; a further one built with the action fury on the reflecting metals, where the blunt object is the metronome of the repeated and violent action, until foretelling the catharsis of the artist on the matter, while the mirroring and deforming surface increasingly involves the viewer in the process of existence and time consumption in space.
Besides the research on reflective metals differently marked by the action of time, it is possible to find the more recent study on burnt canvases, often circular, superimposed in compositions that consider large diptychs, checking the comparison of language and temporality among paintings, burns, thickenings and rarefactions inside the frames. Cronotopografie intended to re-read the history of art since the second post-war, now investigating the tension toward “beyond” in spatialist key, now claiming the power of language, in a dialectical relationship between matter and sign where time is the common denominator, used by Bonamini in a consistent and always immediately recognisable manner.
More recently it is noticeable the application of neon lights, called to emphasize the passage of time, the creative emphasis and the conceptual rigor of the artist’s action on the support: therefore in the name of a work as a result “(…) of the two entities (the “heat” of sensitivity and the “coldness” of logic) that can be compared with each other (…)”. There could not be better definition except the one offered by Bonamini himself, to close and re-open a reading path on his forty-years long research.