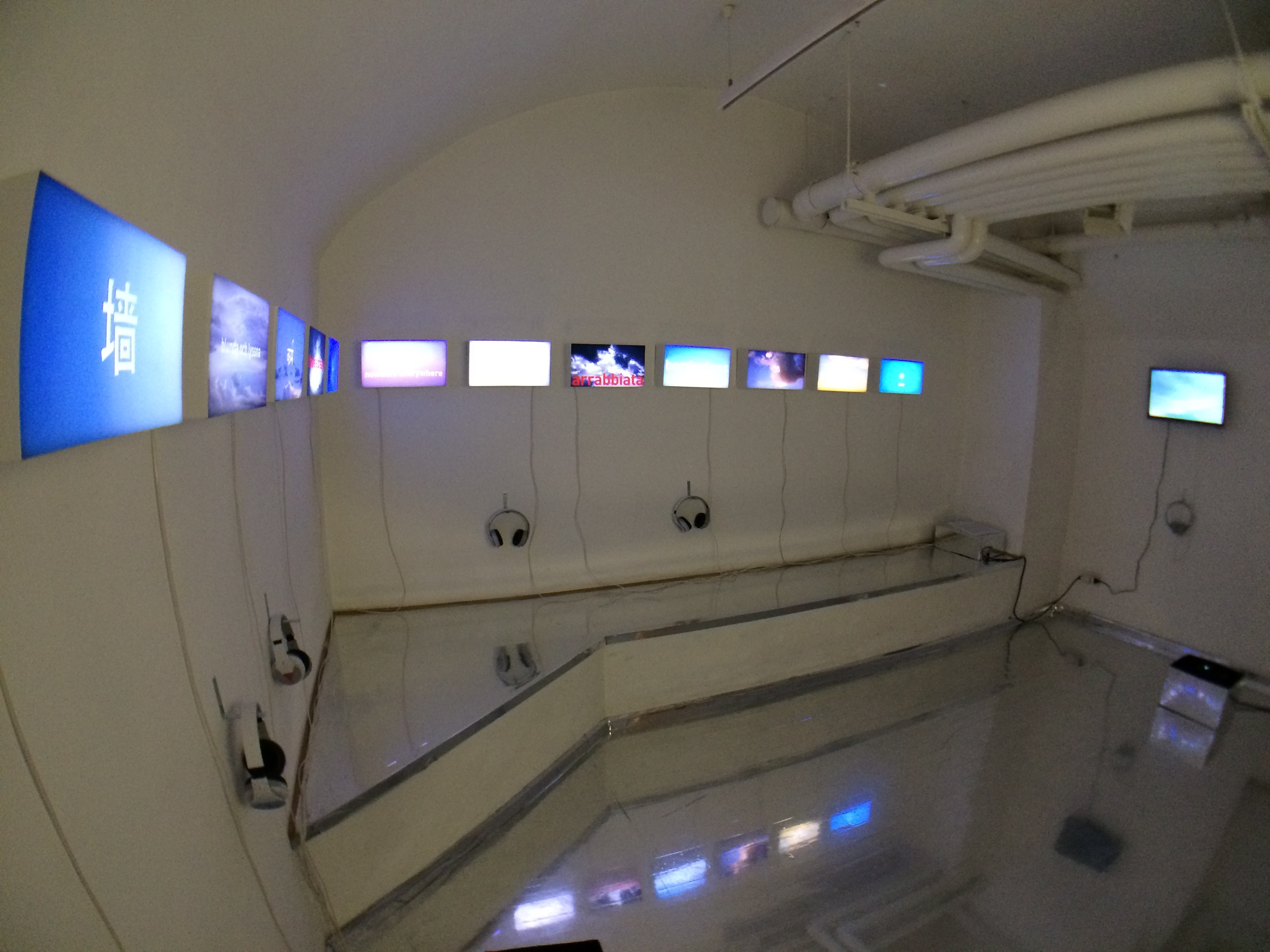 This exhibition is the result of a site-specific project that treats the eternal theme of the border between countries, understood as threshold, passage and osmotic membrane although often – and dramatically – sealed. Fourteen light boxes distilled in the darkness of the project room space open an equal number of windows on 14 different skies. Horizons of distant nations and geographies, differentiated by atmospheric conditions, climatic signals and different moments of the particular day passed through in the blue by subliminal messages, words and graphic writings that in a verse (and a cry) sum up the identity of a place or its story/history.
In more than ten years of research, the skies that Sara Badr Schmidt has photographed during her travels around the world employ a vocabulary that is essential but to the point in unison with voices that rivet a state of mind, an epochal episode. Suffice to think of the sky of Paris, immortalised in January 2015 only a few hours following the tragedy of Charlie Hebdo: from the sunset clouds there emerges the writing “témoin” (witness). Or else the sky of Beirut in February 2012 with its writing “sawa” (together), a lyrical allusion to the image of a city where to live “together” appears to be a utopia. The sky above Ground Zero in New York is a lagoon of dust and mist: in the mistiness one makes out the top of the Liberty Tower. The word “empty” is dense with meaning.
The dialogue between the individual skies, the sky as emblem of a mystical space and the precise word that ‘inhabits’ it like a universal movement, icon of a culture and a civilisation, betrays Sara’s personal vicissitudes and within this intimacy explains the origins of her work, the genesis of her thought. Born in Stockholm (her mother is Swedish and her father Lebanese), she ‘arrived’ in France periodically, in order to escape the Lebanese conflicts or to build a new experience, a new life. She has reflected upon the cohabitation between cultures and religions, on the unresolved problem of territorial belonging, on the political and social identity of places, on the possibility or the dream of an equilibrium and cohabitation between peoples, irrespective of violated borders. “Borderless” – in a sole word – synthesises this mirage.