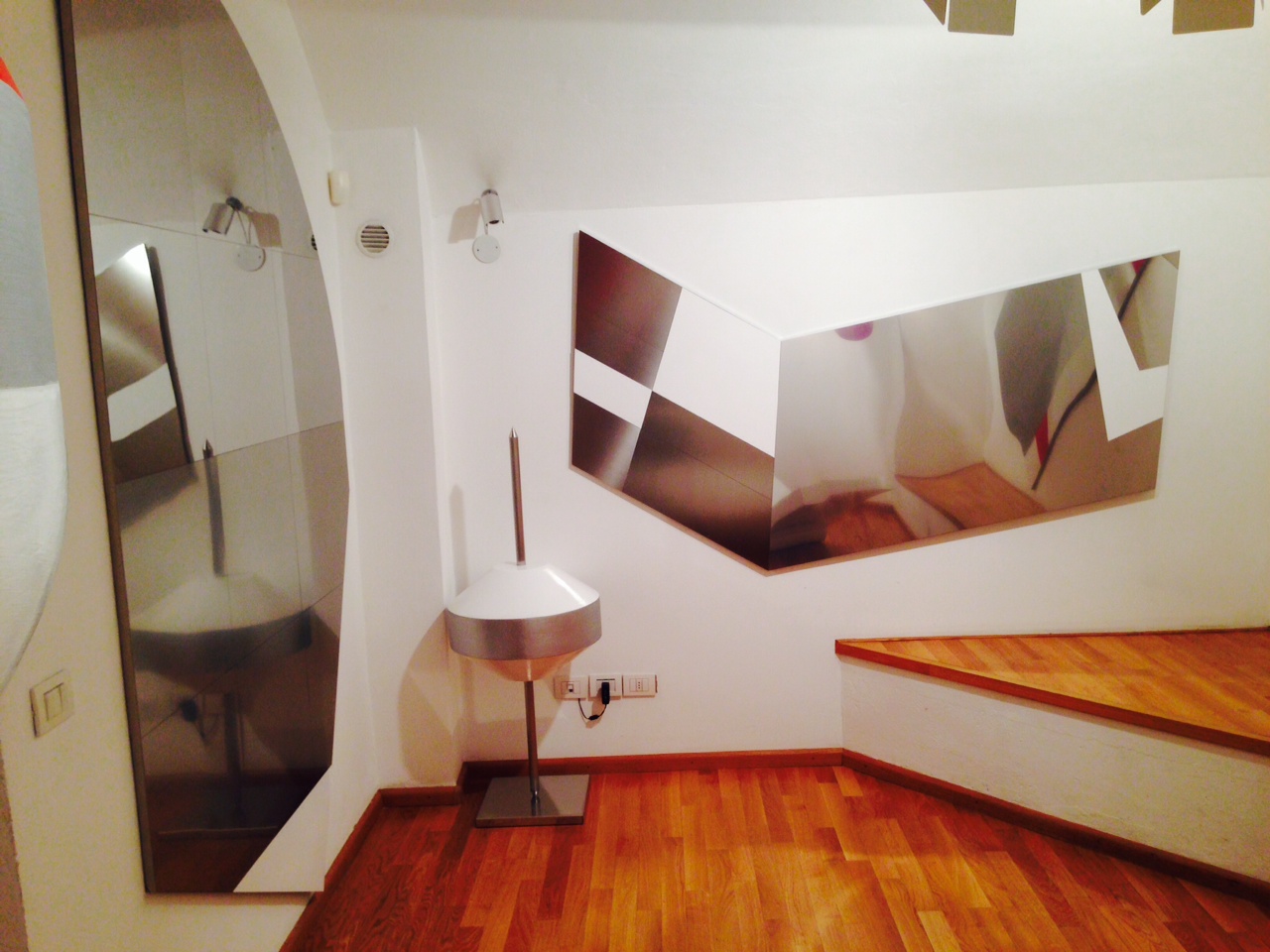 Rita Siragusa was born in Brescia on March 5, 1973 . After the art high school ” Vincenzo Foppa ” in Brescia , she attended the Brera Art Accademy in Milan, where she graduated in sculptural arts with Igino Legnaghi in 1996.
In the two year period 1998-1999 she worked as laboratory assistant in teaching the “Design and plastic and visual Techniques” course of Holy and Contermporary Art at Brera Academy. In 1999 she attended the “Laboratory of Sacred Art ” of Flaminio Taroni in Milan and the “The Atelier of Sacred Art “of Filippo Legnaghi in Verona. In the same year she installed the iron public sculpture “Virage Harmony” in the Sculpture Park of Viadana. She held her first art exhibition called “Rita Siragusa”. Later she held another exhibition called “In equilibrio con forza tra smontaggio e rimontaggio” in Piazza dei Signori in Verona.
In 2001, the bronze piece Apollo scanner became part of the collection of the Museum of Modern and Contemporary Art of Masnago Castle in Varese. Civic Gallery of Contemporary Art in Lissone acquired a bronze sculpture from her collection. In the same period she organized and held a personal exhibition in the Sartirana Lomellina Castle. In 2002, her monumental iron sculpture called “ Dorate barriere delle stelle” was located in the public park ” Twin Towers – September 11, 2001 ” in Brescia. In 2003, she held another personal exhibition called “Rita Siragusa” at Palazzo Bonoris in Brescia and later the exhibition called “Un certo incanto” coordinated by Flaminio Gualdoni. In 2004 she was invited to to take part to the fourteenth Quadrennial Art Exhibition called “Preview 2003-2005” in the Palace of the Company for Promotion of Fine Arts in Turin . Her piece “Il bronzo, Io e Dio” implemented the collection of the Episcopal Seminary in Trapani.Then she held her personal exhibition “Rita Siragusa” in Orzinuovi – Rocca di San Giorgio. She also took part to another art exhibition called “Oltre il perimetro” organised by Claudio Cerritelli and Antonio Zavaglia. In 2006 she placed other two public sculptures “Senza chiave” in Ranghiasci Park in Gubbio and “Campo delle possibilità” in the town of Caltavuturo.
Together with Ugo Nespolo she exhibited his jewellery at “Lifestyle”gallery in Brescia. In 2008 she participated to the first sculpture Chiari competition. Then she took part to several exhibition arts such as “Artisti Bresciani”, “La fine del secolo breve” and “Scena aperta” at Villa Mazzotti in Chiari. In 2009, the Diocese of Trapani , invited her to take part to the collective exhibition “Across the Cross“. Then she partecipated to other art shows, such as “From Michelangelo to his contemporaries” and then “Limelight“ at Spazio Tadini in Milan.
In 2010 she took part to the “VII Biennial International Sculpture of the Piedmont Region then to “Umberto Mastroianni”Award , and she held a personal exhibition at the Italian Cultural Institute of Munich and in the same period at “Spazio Italia”. She also organised an exhibition in cooperation with Air Dolomiti in the city airport. The monumental sculpture “Traiettorie di luce” was placed in the roundabout of San Martino della Battaglia. In 2011 she won the second prize in the competition organized by the Brennero motorway for the sculpture to be placed at the motorway exit of Verona Nord. Her projects were shown at Palazzo Forti in Verona . The sculpture “Meno uno” was located in the village of Sirmione. The following year she was present in the ”Astratta due” exhibition group organized by Zappettini Chiavari Foundation. Some of her monumental sculpures was installed in the center of Brescia during the “Days of Design”. In 2013, for the 39th anniversary of Piazza della Loggia massacre she was invited to the collective ” Nessun Dorma ” from the Wave Photogallery in Brescia. She is currently cooperating for the exhibitions “Il silenzio e l’attesa” and “Un’estetica dell’alterità” organised by Cristina Muccioli and Luigi Radici .
Her most recent production includes, in addition to monumental sculptures, graphic works, jewellery and design objects. She works as a Professor for “Santa Giulia Belle Arti Academy” in Brescia and collaborates with the Artistic Laboratory of the Child Neuropsychiatry Department of the Civil Hospital in Brescia.
She currently lives and works in Brescia.