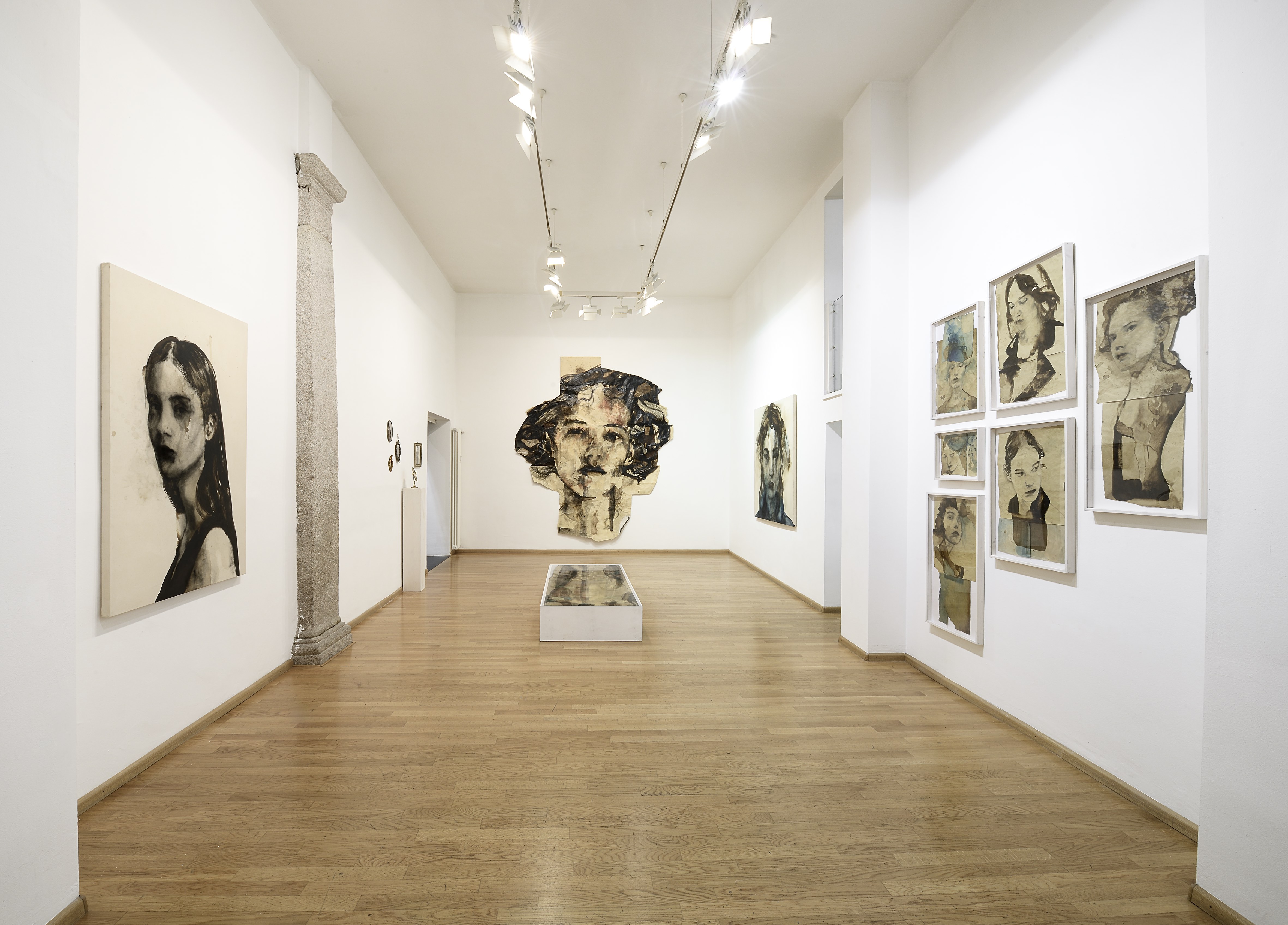 I’ll be your mirror | Domenico Grenci

In an almost obsessive investigation treating the female face in all of its variations and differences, Grenci represents its irreducible variety, its uniqueness and its constant fascination, irrespective of the manipulations carried out by cosmetics which at times hide its intimate truth and authenticity. The figures portrayed by Domenico Grenci fluctuate within a dimension that lies outside of time, lacking any sort of material and contingent reference. The scene on which they insist is emptiness, void of whatever spatial or temporal allusion, magnetically lived in by the woman. Grenci’s female faces appear to surface from an old photograph, one corroded by time. It’s the bitumen, a poor and paradoxically heavy material, that creates an effect of indefinite and incomplete estrangement, similar to what is evoked by a blurred or faded image. The artist tries to grasp something hidden in these disquieting and enigmatic faces which ask questions to which there is perhaps no answer: in accordance with the profound respect of the female universe which is at one and the same time delicate and sensual, vulnerable and strong, trying to extrapolate their essence in all their facets and shades of meaning. He carries out what he himself defines as an “elevatio animae” which becomes a sort of compensation of that identity offended by the commercialisation of the body and of ephemeral beauty.
A ‘draftsman’ of indisputable talent (who from the many possible artists we could mention seems to have undergone the influence of Egon Schiele, Manolo Valdés and Marlene Dumas), Grenci has chosen to employ a very unusual material – bitumen – whose dark/gloomy qualities leave ‘halos’ of mystery inside the body and on the edges of the form, exudations that prolong its echo, attenuating the peculiar semblances of a face in the emptiness of the canvas or the sheet of paper to the point of making them become a sort of apparition that fascinates us, that we are induced to scrutinise and introject before dissolving, forever losing memory of it.
On exhibit is a selection of the artist’s most recent works produced on canvas and paper, together with an installation created for the spaces of the Nuova Galleria Morone.
Domenico Grenci was born in Ardore (Italy) in 1981. He both lives and works in Bologna.
He exhibited at the 54th Venice Biennial in the Arsenale, Tese di San Cristoforo, thus confirming the important work of this young Italian artist.
He has taken part in various prizes and awards: the “Morandi” prize for engraving (2005); the SAMP Award (2006) with a purchase on the part of the Fondazione CARISBO; the Celeste Prize (2007); the Goldener Kentaur; the European Academic Award in Munich (2007, first prize); the “Maggio Fiorito” in Cento a Ferrara (2008, first prize); and the National Award for the Arts of Catania.