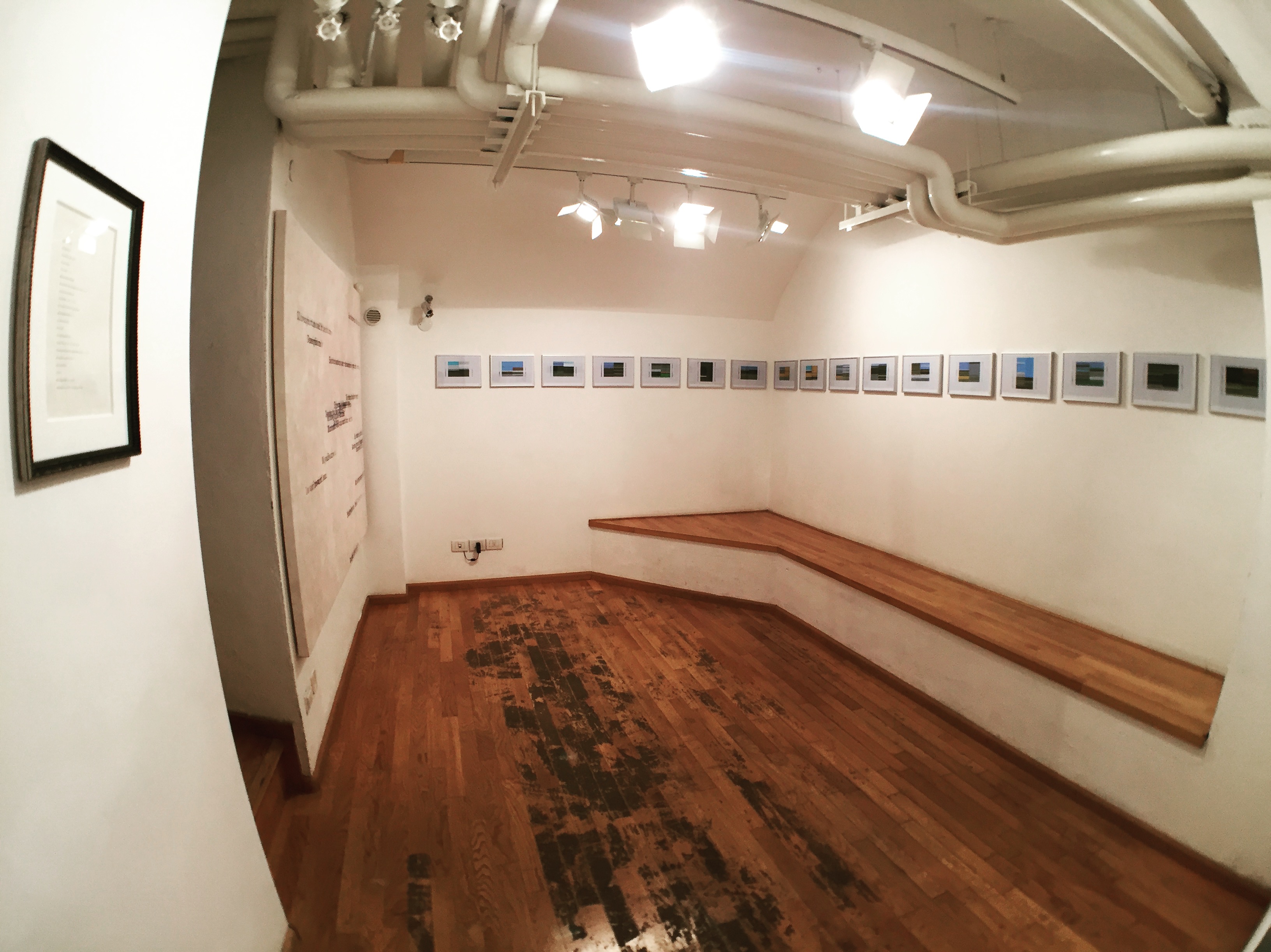 Italo Calvino said that the “geographic map even if static, implies an idea of narration, because it is conceived as a route”. Patrizia Novello’s GEOGRAFIA includes the same idea of narration. Her geographic atlas – her map of places removed from sight and transposed in the logic of the sight – implies writing a diary of the journey which, not by chance, spreads on the serried sequence of the algebraic illustrated cards. For each landscape, a stage. For each stage, the scanning of a horizon made up of a defined symbolic system of coordinates: longitudes and latitudes of the mind, nonexistent lines cast by the eyes within the nature, parallels and meridians that are drawn between surfaces and which punctuate deeply the perspective of things.
This work of inquiry of the landscape starts from the mere observation of a place, filtered by the didactic image of an illustrated card. Through a process of reduction, it succeeds in picking out the structure of the view, the proportions between surfaces, the dominating colours, the balance between natural elements and the distribution of architectural elements in an anthropized environment. The whole is reduced, by an analytic method, to a mathematical essence, to the bulk setting apart every body within the relative space.
Such an abstraction process subtly cites the great masters of the 1900s, notably Cézanne and the calibrated compositional architecture of his paintings, as well as his analysis of the relation between form and surrounding space. It is also a reminder of the measured scanning of the more synthetic still lifes of Morandi, and the conceptual research of Sol LeWitt’s art and his insight into the planning of design, his need to build a sort of formal syntax based on the multiplication of geometrical elements. The theme of the word – the letters transcribed on the 21 captions of the cards, in French, Italian and English, and typewritten using the famous Olivetti Lettera 22 – recalls the textual works of Agnetti.
Patrizia Novello applies this ideal background to the theme of geography. The prospect, the map, the overview of a place become the starting points for the discovery of a framework, a tissue, a structure of reality, which, like an x-ray, reveals the skeleton of the visible and submits the invisible rule to the superstructure of appearance. “Geometry as a measure of the Earth” commented Cézanne perceptively. And this explains Novello’s use of graph paper as a support to her strictly pastel drawing. With long horizontal stripes, each element of the landscape corresponds with a space, and each space with a dimension brought to the edge of a logical order.
The outcome is a topographic diagram in which the geographic lines, the natural forms and the human interventions run into the the observer’s gaze. Here, at this point only, the element of poetry comes into play. Can the individual perception modify the soul of things and add an unforeseen lyric note? As the theorists of emotional geography have asked: how much do places influence our choices? How important are emotions for our decision to inhabit a space? Novello’s work echoes that of Ugo La Pietra, whose reflections on the destiny of humans in an ever more alienating and ever less welcoming urban environment was aesthetic research with anthropological implications.
In Patrizia Novello’s GEOGRAFIA, the conditions are the same, but they turn into an absolute abstraction of the daily atlas that is sublimated into an “atlas of emotions”. A deviation from the rigour of the graphic stems from the hidden nature of feelings. In this way, Novello triggers a doubt about the impartiality of the reflected data and the remote visions. The mystery of existence is hidden in the tiny deviation between inaccurate coordinates.